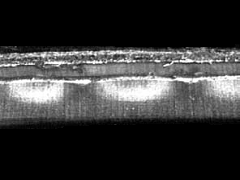 Wrinkle rating is a critical measure of the double seam quality. The seam’s tightness (the dimension that is measured during wrinkle rating) is often referred to as the “primary seal” of the double seam (overlap being the “secondary seal”). A high percentage of wrinkle (or, a low tightness) can be caused by incorrect seamer setup and it can prevent the seam from being hermetically sealed.

The root cause of wrinkle rating can be attributed to:

As the seam is formed, the diameter of the flange is reduced, this causes an excess of material that has to be distributed around the can. Internally, this causes the cover hook to bend and fold, creating “wrinkles”.

How to measure wrinkle (Tightness or Wrinkle rating)

A high wrinkle (or low tightness) rating is typically around 70% or lower.

Wrinkle is typically rated in a resolution of 10%, with a normal seam rating between 90-100%.

Wrinkle is typically measured by tearing down the seam using a Can stripper and then evaluating the cover hook visually or using a wrinkle gauge.

The wrinkle section removed from by a seam stripper: Inserting the wrinkle section in to the seam inspection system: Measuring the wrinkle in the seam inspection system: From a cross section, a wrinkle can appear as a localized dip or curl in the cover hook going outwards towards the edge.

Reverse wrinkles are folded up in the opposite direction (upwards) and are not nearly has harmful as proper wrinkles.